Kathrin has extensive experience in branding strategies as well as in developing special campaigns in the corporate world and public affairs industry. She has handled sensitive procedures in her work with entities for social change such as non-governmental organizations and political foundations. She oversaw the creation, development, and implementation of Europe-wide communications campaigns for the Commission on the Enlargement of the European Union. Kathrin also spearheaded the communications for the successful cultural project under the auspices of the Austrian EU presidency called "Cafe d'Europe", which took place across 27 EU member states.  She has solid experience in building strategic partnerships with international and national media outlets throughout Europe. Her expertise lies in strategizing the management of digital media companies in all aspects of press and public relations. This skill set has made her a key player in the image branding and the Europe-wide networking of, among others, smartclip. She has been heavily involved with smartclip since it's inception in 2008 and today it is amongst the global leaders for multiscreen and brand video advertising.  Kathrin also consults with numerous companies across the whole gamut in digital media, from traditional media work with social media activities on company websites, to creating presence at international trade fairs and conferences. 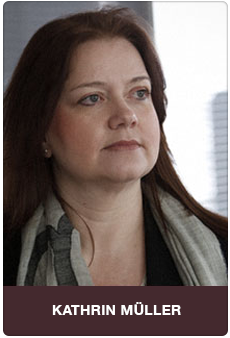 After an apprenticeship as a clerk in business and foreign trade at the Otto Group, Kathrin studied Communications, Politics, and Economic Policy.

2002
Bronze at the German PR Prize in the "Communication Design" category. A LEGO building competition for young designers, with the goal of developing a LEGO robot that was sent to the International Space Station.

2003
PR Report Award in the category for "Use of Images and Graphics in Public relation for ABSOLUT. A custom designed visual project for the legendary ABSOLUT bottle

2004
PR Report Award in the category of "Event of the Year" for the "Kuhbiläum." - marking 30 years for the Milka cow. In their explanation, the jury made special mention of the media in the production.

2007
The German PR Prize for the European project "Café d'Europe" in the category "PR for public venues".

With much verve and a head full of ideas, Cornelia Bornheimer supports the team of Cookie Communications. Her passion lies in strong texts, both in German and in English. Cornelia has a master’s degree in American Cultural Studies. She unites great curiosity, an enthusiams for communications and a high degree of organization and customer focus. She particularly regards new challenges as a motivation.

Jasmin has been living her enthusiasm for language since early childhood. Her successfully completed journalism studies finally paved her way into the communications industry. Jasmin enriches the Cookie Communications team with creative ideas, her language skills and the ambition to never hesitate from learning new things. During her semester abroad in Spain, she also learned to openly and curiously confront new cultures and everyday challenges. She uses these experiences to deliver the best possible results to customers from all over the world.

Creative ideas, a wide field of interest and the drive to tell stories. That is what defines Jan Kappel. He strives at inspiring people and making complex topics understandable. With these qualities, Jan is a real addition to the Team of Cookie Communications. Jan has studied European studies and international relations in Denmark, Prague and Dresden and earned experience, working in Germany and internationally. He has lived intercultural understanding during his time of studies and acquired experience in organizing conferences as well as in international PR.